The Lambda model1 is based on ephemeral microVMs (or containers). Once a request is received, AWS will provision resources on-demand to run developer’s code and compute what’s necessary.

Depending on the runtime2 and how large is the codebase and its dependencies, the start up process of a function may take some time (from a few hundred milliseconds to several seconds). This is what is called “cold start” (the function was “cold” when the request was received).

AWS allows developers to set a minimal concurrency threshold in which the function would be warm to answer all requests in under double-digit millisecond. It is also possible to use auto-scaling to increase provisioned concurrency proactively when demand is on the rise.

Provisioned Concurrency is a step away from the serverless model of paying for what is used. By enabling it in a Lambda function, it is going back to renting compute capacity for time. This model defeats one of the main arguments in favor of using serverless: not paying for idle time.

One major caveat is that, by enabling Provisioned Capacity, the function is inelligible for the Lambda Free Tier.

Another problem is the complexity that the pricing model for Provisioned Concurrency3 adds to the overall Lambda financials. The amount of memory needed by a function is usually fixed and determined by the workload, so developers are left with only one dimension to analyze Lambda costs: duration of the executions.

Additionally to duration, with Provisioned Concurrency developers must also observe:

AWS Lambda Provisioned Concurrency will charge for the following dimensions:

Consider a function with 512 MB allocated running for 31 days. It receives 10 Million requests, with a duration of 2 seconds, each.

In the traditional, on-demand pricing model, this function would cost:

With this example, we can see that using provisioned concurrency can greatly increase the costs of running serverless workloads on AWS Lambda. In light of that, developers should plan and anticipate costs carefully before using it.

The Provisioned Concurrency level counts to the function’s Reserved Concurrency4 limit and also to the account regional limits5.

It is possible to use Application Auto Scaling6 to automatically scale up and down the concurrency provisioned threshold.

There are three ways to implement the auto-scaling:

The first two options have some similarities in the way they work and are suitable for applications with unpredictable load behavior.

The last one (Scheduled-scaling) is suitable for applications that have predictable spikes in demand, such as an e-commerce during the Black Friday period, for example.

It will open a new screen to select a version or alias of the function and the desired concurrency level: 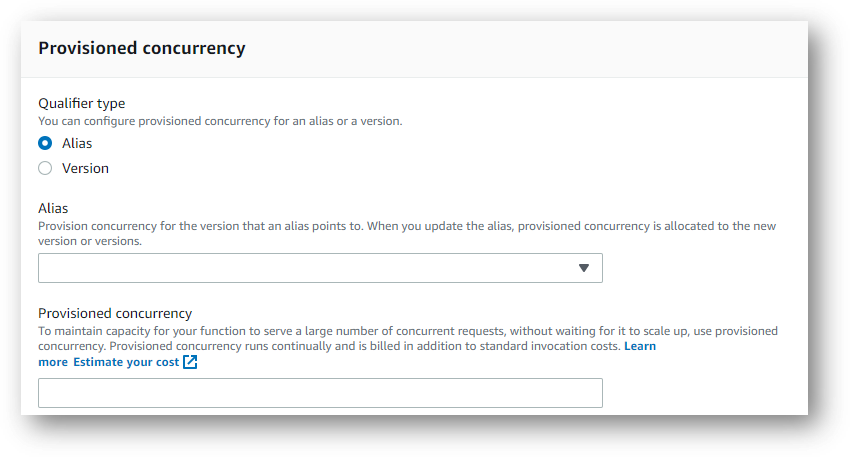 With the AWS CLI, we can add, list and delete provisioned resources to our functions. Please see examples below:

Add 50 as the concurrency level for the version 123 of my-function:

Delete concurrency provisioned for the version 123 of my-function:

In the AWS SAM YAML, declare Provisioned Concurrency settings like the example below.

Bear in mind that AWS SAM will raise an error if this feature is used when AutoPublishAlias is not set.

Provisioned Concurrency can be configured in the Serverless framework YAML file such as: